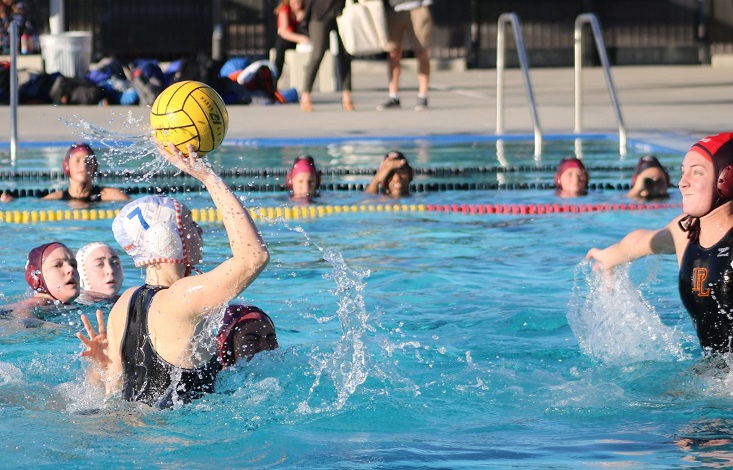 For the first time since the 2015, the Clairemont Girl’s Water Polo team will get to raise a league banner in the gym after taking down Point Loma 7-4 Thursday afternoon. Chieftains were lead by a hat trick from junior Phoebe Currigan, as well as an impressive defensive performance from junior Fiona Flanagan who recorded 5 steals, and a big game in goal from junior Lilly Fulton who stopped 10 of 14 shots on cage.

Although the lady Chiefs knew what was at stake, the energy in the pool never really met the expectation level of a championship match. And on top of that, Point Loma came into the match having won 5 of their last 7 and feeling confident after an impressive 2nd place finish in the San Diego Open. The combination resulted in a too close for comfort match that the Chiefs did not expect to encounter.

Out the gate Clairemont showed their dominance, suffocating the Pointers on defense and shelling them on offense. But after 5 minutes of game time the score remained 0-0 thanks in large part to another great game by the Point Loma goal keeper. Finally junior Phoebe Currigan broke through with back to back goals to put her team up 2-0. But on the final possession of the first quarter, Point Loma managed to finally get their first shot of the game off – and unfortunately for the Chiefs that shot went in.

Second quarter was much of the same, as Clairemont exerted their will on the Pointers but were unable to pull away for much of the quarter. Junior Fiona Flanagan reestablished the 2 goal lead halfway through the 2nd after converting a beautiful shot on a power play from the top, then Currigan topped off her hat trick to put Clairemont up 4-1 with under a minute to go. But once again, in the waning seconds of the quarter, Point Loma put another shot away – only their 3rd shot taken in the first half – to close the gap 4-2.

The fire never quite got lit under the Lady Chiefs, and the Pointers were feeling the upset bid in the making! The offensive pressure amplified from Point Loma in the 2nd half, but fortunately junior Lilly Fulton was up to task to save the day, denying Point Loma 9 times on their final 11 attempts. Junior Kaitlyn Heindl and Freshmen Callie Browne managed to score one a piece in the 3rd quarter to establish a 6-2 lead, but like clockwork the Pointers found a way in the final seconds to score and close the gap to 6-3.

The fourth quarter could have gone south for Clairemont, who gave up a goal on Point Loma’s first possession to let them draw within 2, but the defense held fast to deny any further attempts at an upset. And after junior Kaitlyn Heindl scored an excellent shot off a power play with under 3 minutes to go, the Pointers became deflated. The Chieftains hung on for the 7-4 win and claim no less than a share of the Eastern League Championship! Clairemont has a chance to claim the full title if Point Loma is able to knock off University City on Friday. So GOOD LUCK POINTERS!!!

The Clairemont Girl’s Water Polo team improves to 17-10 on the season and will finish 9-1 in league. Up next, the Chieftains face off with San Diego’s #5 ranked team, Del Norte Nighthawks, on Friday night for their final game of the regular season. Game is at Del Norte and will start at 5pm. COME OUT AND SUPPORT YOUR LADY CHIEFS!!!